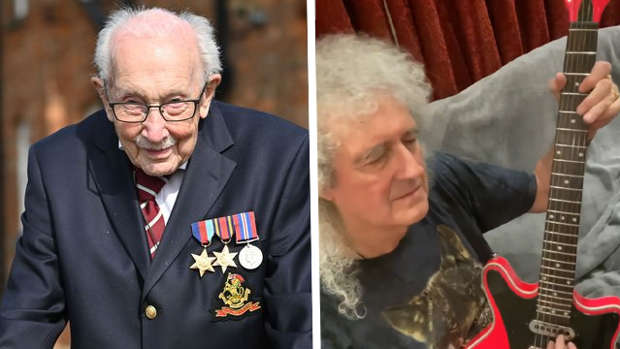 After it was announced Captain Sir Thomas Moore had sadly passed away earlier this week, Brian May took to social media to perform a heartfelt tribute to the war hero.

The beloved WWII veteran - who raised over £32million for the NHS by walking laps of his garden – died at the age of 100 after a battle with Covid and pneumonia.

Moore, who was made an honorary colonel on his 100th birthday, previously released a charity single cover of 'You'll Never Walk Alone' with singer Michael Ball, which reached number one in the charts, making him the oldest artist ever to have a UK number one single.

And now the Queen rocker has performed a spine-tingling guitar solo of Gerry Marsden's iconic song in honour of Moore.

Alongside the video of his performance, May wrote: "You’ll Never Walk Alone. Well, this is just a low-tech spontaneous mark of respect.

"For Captain Sir Tom Moore, who, by walking, inspired us all to stand up and fight - God speed on your next journey, Sir.

"And for Gerry Marsden, who made this an axis for pride in his home town of Liverpool. What an anthem!!!"

May added: "And for all our dear ones, sadly missed, because they have gone on, to that place where we are all headed in the end. With all respects ... you’ll never walk ... alone. Bri."

Moore set out on his epic charity mission last year on April 8, setting himself the target to walk 25 metres around his garden 100 times before his 100th birthday.

He beat this target by April 16 and his modest target of raising £1,000 was smashed. He now holds the Guinness World Record for "most money raised by charity walk (individual)."

Moore was made a Knight by the Queen in the sun-soaked gardens of Windsor Castle in July, after being personally recommended by British Prime Minister Boris Johnson for the knighthood.