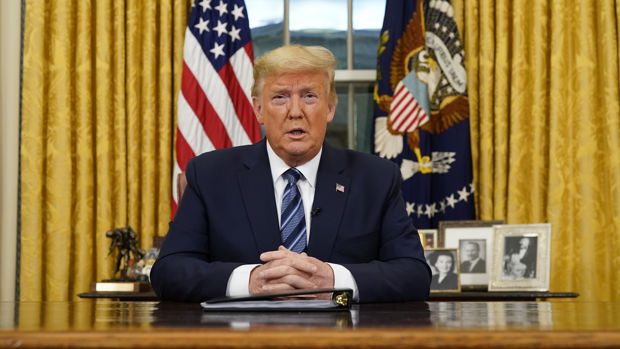 President Donald Trump has suspended all travel to America from European countries to stem the flow of coronavirus.

The travel ban will be in place for 30 days, Trump has just announced.

Britain is exempt from the ban.

"From the beginning of time, nations and people have faced unforeseen challenges—including large-scale and very dangerous health threats," Trump said in the address.

"This is the way it always was and always will be. It only matters how you respond."

Trump was considering new travel advisories, a national disaster declaration and a delay in the tax filing deadline.

After days of playing down the threat, Trump announced he would be delivering a prime-time Oval Office address on the federal response to the outbreak.

The number of confirmed cases of the infection topped 1,000 in the United States and the World Health Organisation declared the global crisis is now a pandemic.

For most people, the new coronavirus causes only mild or moderate symptoms, such as fever and cough.

For some, especially older adults and people with existing health problems, it can cause more severe illness, including pneumonia.

The vast majority of people recover from the new virus. According to the World Health Organization, people with mild illness recover in about two weeks, while those with more severe illness may take three to six weeks to recover.

This article was originally published on NZ Herald and is republished here with permission.