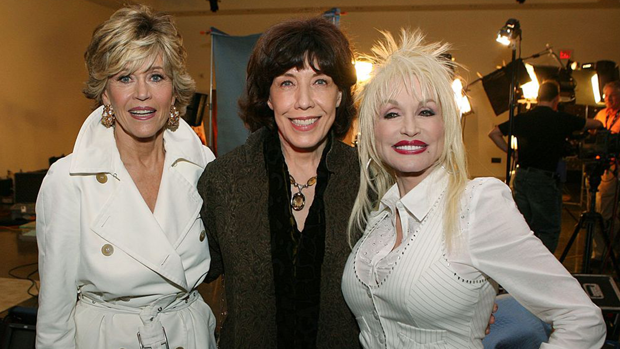 The three that smashed box-office records in the '80s will once again be on screen together, this time in an episode of Grace & Frankie.

Dolly Parton confirmed the rumours in an interview on ITV's Lorraine, the country singer, 75, revealed: 'I have been trying to do Grace and Frankie for years. We worked so well on 9 to 5 and it's a crazy wonderful show'.

Jane Fonda, 83, and Lily Tomlin, 81, star in the Netflix original series which has run for six seasons.

The series tells the story of an unexpected friendship of two women whose husbands leave them to marry each other.

'We have been trying to write me in somehow so when it is safe to actually do a production, I will probably get around to doing that,' Dolly continued.

The film 9 to 5 was released in 1980, and follows three office female secretaries who decide to get revenge on their tyrannical, sexist boss by abducting him and running the business themselves.

The film grossed over $103.9 million US, and is the 20th-highest-grossing comedy film.