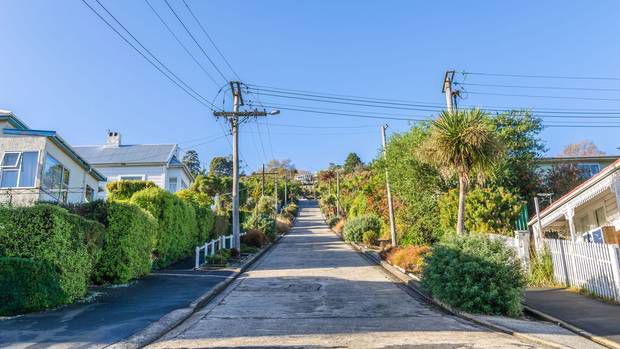 Dunedin's Baldwin Street has lost its status as the world's steepest street.

The sleepy Welsh town of Harlech is officially now the home of the world's steepest street.

Ffordd Pen Llech, which snakes through the town of Harlech, has a gradient of 1:2.67 (meaning those travelling on the street go 1 metre up or down for every 2.67m travelled horizontally).

This record beats Baldwin Street, which has a ratio of 1:2.86.

Baldwin Street has held the record for over a decade.

Otago University marketing expert Dr Andrea Insch said tourists would still be drawn to the street, but advertising strategies might need a shake-up.

"I think maybe introducing visitors to other interesting new developments happening in the city.

"Our art tours and heritage tours could perhaps be given more emphasis.

Christie said regardless of records, Baldwin Street "is an iconic street for people to visit".

Guinness World Records guidelines state that to be eligible for the steepest-street record, the road must be open to both pedestrians and motorised traffic.

It is also based on the maximum gradient over a ten-metre span, comparing the vertical rise to the horizontal distance.

A sign warns the Welsh road is unsuitable for motorists and its steepest part only allows traffic to travel uphill.

A sign gives a slope reading of 40 per cent, but it is normal practice for United Kingdom highway authorities to round off gradients to avoid confusion.

Welsh man Gwyn Headley has been leading the campaign to snatch the title of the steepest street from Dunedin.

An incident a year ago prompted him to start the campaign.

"I have a 4WD car with anti-lock brakes - I got about halfway down [Ffordd Pen Llech] and the car slid forward about six feet with all the wheels locked and I thought: 'This is very steep' ... So I went on to Wikipedia and looked it up and it said it was the steepest street in the UK," he told RNZ.

"So that piqued my curiosity and I looked up the steepest street in the world and found it was yours in Dunedin."

However, when Headley compared the figures for the two streets it showed the Welsh one was steeper so he got in touch with Guinness World Records.

It is not the first time Baldwin St has been challenged - a claim in 2016 that St Mary's Hill in Chester was steeper was dismissed by Guinness because it is inaccessible to vehicles.