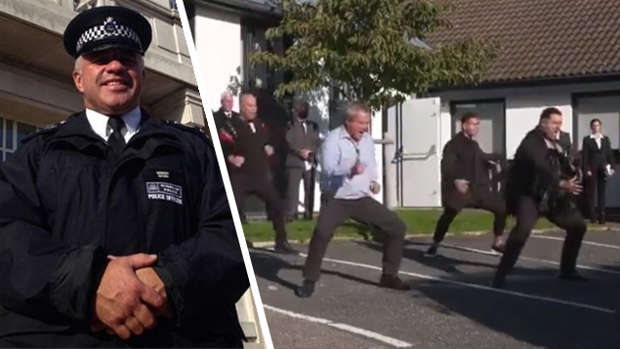 The emotional moment took place as Ratana was today farewelled by a small number of family, friends and colleagues at a memorial in West Sussex.

Brooke joined members of Ngāti Rānana - a London Māori Club - in performing the haka as Ratana's casket was taken from the premises in the hearse.

As part of today's service of celebration and thanksgiving for Sgt Matt Ratana, a traditional Māori Haka was performed as a mark of respect.#RIPMattRatana 💙 pic.twitter.com/agBtNEJb3k

At the funeral service, which was live-streamed, his partner Su Bushby said Ratana would "always be in my heart".

In a tribute read on behalf of Bushby by friend Lorraine Dray, she said Ratana made the most of "every minute of his precious 54 years".

"Your gym, rugby and policing family will help your legacy, your kindness and your spirit live on. You have touched so many people's lives, you will be truly missed. My life has been richer and funnier for knowing you and I feel blessed you were in my life."

Ratana's son Luke said his father was loved by many. He thanked everyone for their tributes.

"It is deeply touching to see the tributes that have been paid to him and the outpouring of love and support from friends, family, work colleagues, the rugby community and the people of the United Kingdom and beyond."

Originally from Hawke's Bay, Sgt Ratana joined the Metropolitan Police in London in 1991 after moving there in his early 20s.

Today we laid to rest to this legend, Police Sergeant Matt Ratana.

But, it's not goodbye. It's thanks for all you've done sarge, your shift is over but your legacy lives on.

The popular sergeant returned to New Zealand to serve for Auckland City and Counties Manukau police between 2003 and 2008, before going back to Britain.

He also acted as a protection officer for Princess Diana, the Queen Mother and former Prime Minister John Major.

The 54-year-old was shot as he was preparing to search a handcuffed suspect, who had managed to smuggle a revolver into the custody suite.