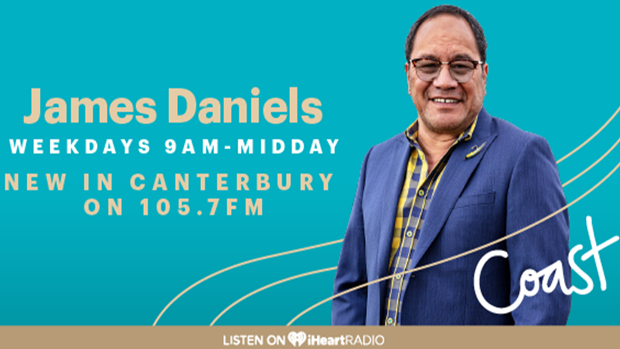 Canterbury broadcasting legend James Daniels gets back behind the microphone as Coast launches on 105.7FM in Christchurch.

Coast will start broadcasting on 105.7FM in Christchurch from Monday (3rd August 2020).

Enticing former radio host James Daniels out of broadcasting retirement to help introduce Coast to a new Christchurch audience is a .

James was last on-air in Christchurch in 2018. Previously, he was one half of the hugely popular ZM Breakfast show with Ken Ellis.

“There’s a real ‘Feel Good’ factor about this. Christchurch is my hometown, I live on the coast in Parklands and radio is my trade. This is a part-time role and my other, full time responsibility as a City Councillor is to all of Christchurch while representing people in the Coastal Ward. I look forward to having fun and playing songs that all listeners know and love,” said Daniels.

“James lives and breathes all that is good and great about Christchurch and its people. Constantly curious and passionately parochial, he’s also one of New Zealand’s most talented and experienced radio hosts. We’re delighted to have him host Coast’s local morning show as we launch Coast to Christchurch listeners on 105.7FM,” said NZME’s Chief Radio and Commercial Officer Wendy Palmer.

The move gives Christchurch audiences access to one of New Zealand’s most popular radio networks and breakfast personalities Toni Street, Jason Reeves and Sam Wallace on an FM frequency.

Toni studied for her degree at Lincoln University so is very familiar with Christchurch, but it’s the first time she’s broadcast a radio show to audiences in Canterbury.

“Working with Jason and Sam is huge fun and knowing we’re now sharing that with Christchurch locals means a lot to us. I can’t wait to start hearing from more of our Cantab listeners,” said Toni.

Previously, Coast was only available in Christchurch on an AM frequency.

“There has been on-going demand from Christchurch listeners to have Coast available on FM, like this message just a few days ago:  ...your morning guys are very good and your music is perfect listening just need to sort out a frequency so I can listen at home and all over Christchurch. There’s not been a week go by without a similar email or social message asking for it to happen,” said Coast Content Director David Brice.

Coast launches on 105.7FM this Monday 3rd August 2020. For Christchurch listeners Jase, Toni and Sam will be followed by James Daniels from 9 until 12pm, elsewhere in New Zealand it’s Lorna Subritzky from 9am to 3pm with Jon Dunstan on Drive and Jason Tikao on Nights.