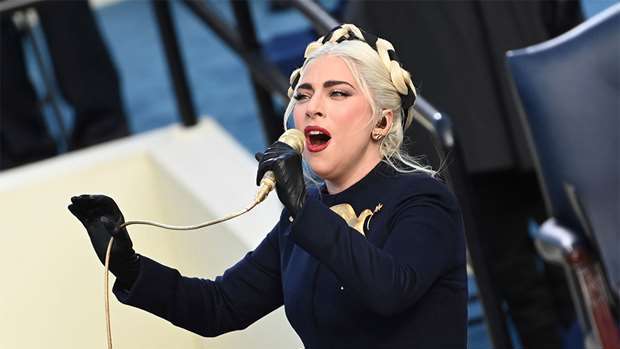 Pop icon Lady Gaga wowed the crowds with her rendition of the US national anthem at Joe Biden's inauguration, bringing a touch of glamour to proceedings with a performance that had fans in tears.

Making her entrance in a custom Schiaparelli black-structured fitted navy jacket with red silk faille ball gown, with a large golden dove as a brooch, the look was understated for the singer who famously wore a dress made from raw meat to the 2010 MTV Video Music Awards.

Gaga was praised for her impassioned performance and fans loved her regal appearance.

Gaga earlier tweeted about the occasion, underscoring the "great meaning" the transition between the Trump and Biden eras had for her personally.

Lady Gaga performed the National Anthem on #InaugurationDay — and nailed it, of course. https://t.co/3EG56RKxsX

The history of celebrities performing at inaugurations dates back to Franklin D Roosevelt's third inauguration in 1941 when a gala celebration the evening before saw performances from Irving Berlin, Mickey Rooney, and Charlie Chaplin, says Lina Mann of the White House Historical Association. "Chaplin performed his monologue from The Great Dictator," Mann notes.

who remembers when they turned a Lady Gaga concert into a presidential inauguration? pic.twitter.com/YxXzruNPUW

The celebrity component only increased over time, and one of the starriest inaugurations was that of John F Kennedy in 1961. That celebration, hosted by Frank Sinatra, drew Harry Belafonte, Nat King Cole, Ella Fitzgerald, Gene Kelly, Ethel Merman, Laurence Olivier, Sidney Poitier, and other celebrities.

Fast forward to the first Barack Obama inauguration in 2009, where Aretha Franklin sang My Country, 'Tis of Thee at the swearing-in, and the new president and his wife, Michelle, were serenaded by Beyoncé singing At Last at an inaugural ball.

Singing our National Anthem for the American People is my honor. I will sing during a ceremony, a transition, a moment of change—between POTUS 45 and 46. For me, this has great meaning.