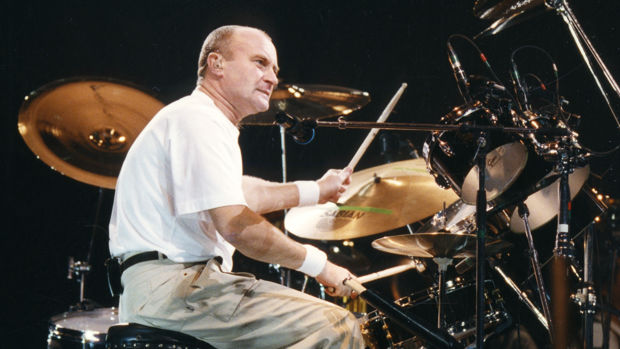 If Genesis fans weren't already excited enough about the band's upcoming reunion after 13 years apart, they definitely were after legendary singer Phil Collins announced he's planning on getting behind the drum kit again!

Collins essentially retired from playing the drums in concert since 2009 after he suffered nerve damage in his hands following a dislocated vertebra in his upper neck, making it impossible for him to play or even stand on his own for long periods of time.

He's since left drum duties to his teenage son Nic Collins and has performed seated for most of his recent shows.

However, despite his condition, the 69-year-old says there are parts of the band's set that he will be playing.

Speaking in a recent interview he said: "I'm gonna do my damnedest to be able to play something, you know, to accompany Nick would be more that way I look at it.

"The two-drummers thing was a big aspect of Genesis' sound, really, it was a very exciting part of it, so it won't be like that; it will be different from that, but it'll have some aspects of that, hopefully.

Alongside Collins, Tony Banks and Mike Rutherford will reunite for 10 shows across the UK and Ireland later this year, marking the band's first time performing together since the last Genesis show in 2007.

Peter Gabriel and Steve Hackett will not be taking part in the reunion.

The band has yet to address whether there are plans to take the tour worldwide.