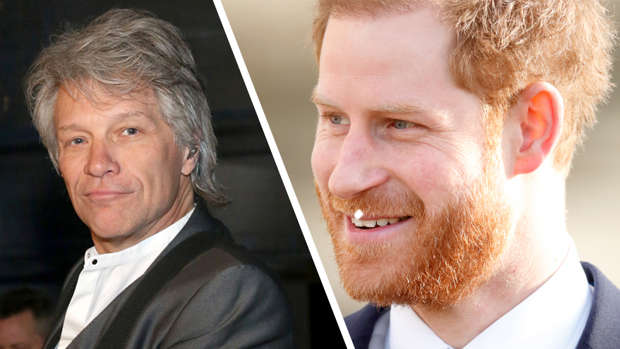 It's a collaboration you probably never imagined would happen, but Prince Harry is joining forces with rock star Jon Bon Jovi — and it's all for a good cause!

Next week, the Duke of Sussex — who recently decided to step down as senior members of the royal family — will join Bon Jovi at Abbey Road Studios in London to record 57-year-old singer's single 'Unbroken' with the Invictus Games Choir, which will be released in support of Harry’s Invictus Games Foundation.

To tease the forthcoming collaboration, Harry took to Instagram to share a hilarious fictional text exchange between the pair.

Alongside a video which appeared to show Bon Jovi messaging the Duke, the dad-of-one teased: "Coming soon...#WeAreInvictus".

Coming soon... #WeAreInvictus • *Disclaimer - this is not a real text conversation*

The Queen's grandson - referencing one of the star's famous songs - replied: "I'm good! Just livin' on a prayer...What's up?"

Bon Jovi continued: "I'm in London on 28th of February and have an idea...#Invictus."

Harry wrote: "Nice! Is it you and the band?"

The rock star responded: "Just me for now, but don't worry - I've got some back up that I think will work."

To finish, Harry made another reference to one of his hits: "Ha! Don't expect me to sing...BUT I'll give it a shot!"

“After many months of reflection and internal discussions, we have chosen to make a transition this year in starting to carve out a progressive new role within this institution. We intend to step back as ‘senior’ members of the Royal Family and work to become financially independent, while continuing to fully support Her Majesty The Queen. It is with your encouragement, particularly over the last few years, that we feel prepared to make this adjustment. We now plan to balance our time between the United Kingdom and North America, continuing to honour our duty to The Queen, the Commonwealth, and our patronages. This geographic balance will enable us to raise our son with an appreciation for the royal tradition into which he was born, while also providing our family with the space to focus on the next chapter, including the launch of our new charitable entity. We look forward to sharing the full details of this exciting next step in due course, as we continue to collaborate with Her Majesty The Queen, The Prince of Wales, The Duke of Cambridge and all relevant parties. Until then, please accept our deepest thanks for your continued support.” - The Duke and Duchess of Sussex For more information, please visit sussexroyal.com (link in bio) Image © PA

Launched in 2014, The Invictus Games is a multi-sport event for wounded and injured veterans and servicemen and women.

The Netherlands will host this year's games, taking place from May 9 through May 16.