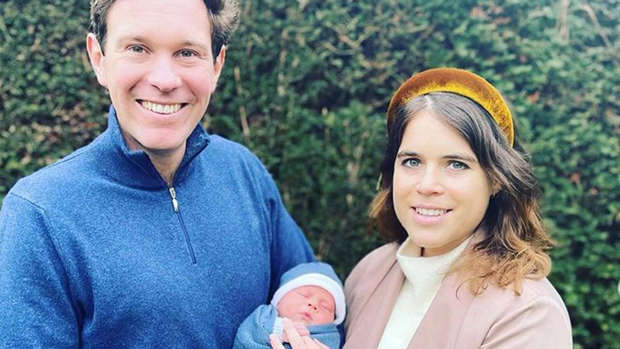 Tuesday was a special day for Princess Eugenie, as she celebrated her first birthday as a mum!

Taking to Instagram to mark the day, the 31-year-old shared her excitement about spending the day with her newborn son August, who came into the world just last month.

"Thank you for the birthday love yesterday❤️ I got the best present I could ask for," she wrote alongside two sweet photos of the royal tot.

The first snap shows the birthday girl and her husband Jack Brooksbank smiling at one another while she cradles their six-week-old son, who's dressed in a cosy white knit sweater that's embroidered with his name in blue.

In a second photo, August looks straight into the camera as he snuggles into his dad's shoulder.

With the exciting news shared on the Royal family's official social media accounts.

"Her Royal Highness Princess Eugenie was safely delivered of a son today, 9th February 2021, at 0855hrs at The Portland Hospital," a tweet read.

"The baby weighs 8lbs 1oz. Her Royal Highness and her child are both doing well," it added.

Her Royal Highness Princess Eugenie was safely delivered of a son today, 9th February 2021, at 0855hrs at The Portland Hospital. Jack Brooksbank was present.

The couple were married on 12 October 2018 at St George's Chapel.

Brooksbank was offered a title by the Queen before their marriage but declined. His decision means their son will not automatically receive a title.

Of the Queen's eight great-grandchildren only three have titles, namely William and Kate the Duke and Duchess of Cambridge's children Prince George, Princess Charlotte and Prince Louis, putting them squarely in the minority.