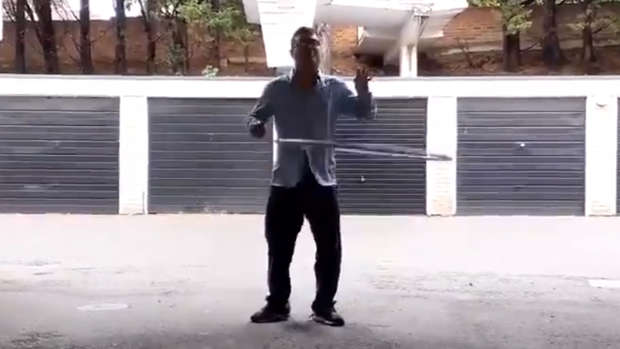 Paul "The Sinnerman" Sinha is a fan favourite on The Chase.

But the much-loved Chaser saddened fans last year when he revealed he had been diagnosed with Parkinson's disease.

However, the 50-year-old brainiac - who is famous for his white suit - isn't letting the disease stop him ...

The comedian has taken to hula-hooping to keep his co-ordination on point and has just hit a new personal best.

Taking to Twitter, Paul showed off his impressive hula-hoop skills in a video, lasting 54 seconds.

READ MORE:
• The Chase's Paul Sinha shares the first photo from his wedding to partner Olly
• The Chase fans are left in hysterics as Ant and Dec hilariously prank Bradley Walsh on the show

Explaining the reasoning behind his newly acquired skill, Paul revealed: "It's part of a process where I learn new skills to help me feel like I'm fighting Parkinson's. Exercise, co-ordination, mental training."

Parkinson’s is a degenerative disorder of the central nervous system, which usually begins with motor symptoms, including shaking and difficulty walking.

Keep it up Paul!