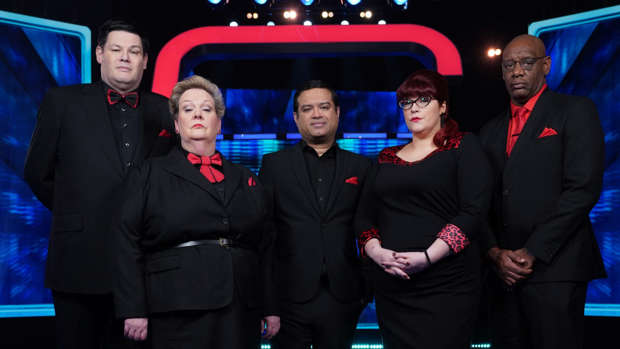 The Chase fans get excited ...

Because the much-loved series' new spin-off show, Beat The Chasers, is coming to TVNZ1 this weekend!

The five-part series - which sees Anne 'The Governess' Hegerty, Mark 'The Beast' Labbett, Paul 'The Sinnerman' Sinha, Shaun 'The Dark Destroyer' Wallace and Jenny 'The Vixen' Ryan all unite - made its debut to UK audiences in April to "tremendous" ratings.

All five Chasers are forming the greatest quiz team on the planet.

Do you have what it takes to Beat The Chasers?

For the special, contestants are called down from the studio audience to take part in a Cash Builder round, where they'll face five multiple-choice questions to win up to £5,000.

But there's a catch; if they answer the first question wrong, they're out and their time on the show is over.

The hopefuls will then face off against the chasers, deciding between various offers, such as facing fewer chasers for less money and vice versa.

ITV describes it as "a brand new prime-time spin on the smash-hit quiz show The Chase, challenging contestants to take on two, three, four or all five Chasers at once."

READ MORE:
• Bradley Walsh left confused after The Chase contestant hilariously rushes off set
• The Chase's Mark "The Beast" Labbett storms off set and hits the wall after losing his game

Previously speaking out about the new show, Bradley said: "The contestants are brave facing one Chaser, let alone all five. With that group of top quizzing brains working as a team, it's going to take some beating. But I can't wait to see who's going to take them on."

While Michael Kelpie, Managing Director of production company Potato, said: "For quiz fans, this is the equivalent of competing in the Olympics or playing in an FA Cup Final. It's the ultimate challenge against the greatest quiz team ever assembled.

"In this brand-new format, anyone who thinks they're clever enough can take on the nation's favourite quizzers."