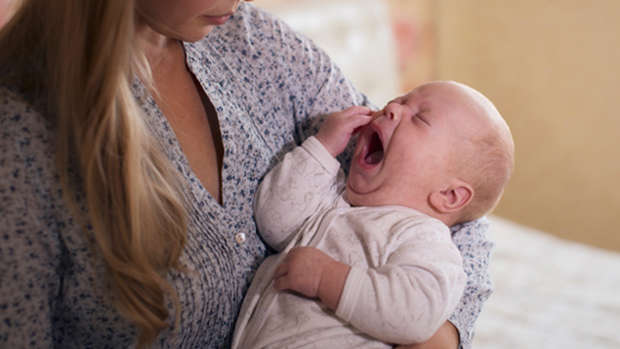 A mother felt pressure to leave hospital just 24 hours after she gave birth - even though she did not feel "mentally prepared".

Kathryn Ryan, who gave birth to her son, Lucas, at Hawke's Bay Hospital on May 20, said she asked to stay longer in the maternity unit because she had suffered post-natal depression in the past and had concerns about her breastfeeding ability.

Ms Ryan, who has two other children, said she had the support of her partner, Francky Godinho, but wanted the assurance of being around medical staff.

Despite being told she could prolong her stay, staff then suggested she and Lucas leave as they were "clinically fine".

"I know you can't stay in hospital forever but if you have enough concerns in yourself that you can't go home - I wasn't mentally prepared for that,"

"I was sleep-deprived, your body's been through a lot, and you're mentally tired. I was in tears telling them 'you're kicking me out'," Ms Ryan said.

She said her partner could not pick her and the baby up until later that day, and she was moved to a day assessment room after being told the unit was short-staffed, and her ward would be closing.

Hawke's Bay District Health Board said staff at the maternity unit would not discharge patients who were not medically fit or if there were concerns about the baby.

However, Ms Ryan said staff at the unit were not aware of her previous post-natal depression.

She said: "I shouldn't have to go around saying I had post-natal depression with my second child, I don't think I was asking too much for a second night when [Lucas] was just over 24 hours old."

The DHB statement said there was no set number of nights women were allowed to stay in the maternity unit.

"Length of stays is based on the medical well-being of both mother and child. However, we would expect most women would be discharged between six and 24 hours after a normal delivery, if all was well." the DHB said.

The DHB statement said one of the hospital wards was being used for maternity patients while a new birthing centre was completed, and it opened and shut based on demand and the efficient running of the hospital.

Ms Ryan said a minority of staff caused an issue - others had taken Lucas so she could sleep, a lactation consultant was brought in to help relieve her concerns, and a room was found for the family to stay in on Saturday night. Then after being told she could stay until 3pm on Sunday, Ms Ryan was asked to leave early Sunday morning.

Ms Ryan's midwife said Ms Ryan had been pressured to leave because there were rules that needed to be followed.

She felt an approach which was more diplomatic, holistic, and sensitive could have avoided what happened.

Ms Ryan said: "They didn't take into consideration [my] mental state. You can't put everybody in the same box, they need to let the mother decide when she's ready to go."

The DHB said maternal depression is something that is always considered and asked about throughout a woman's pregnancy by their lead maternity carer.