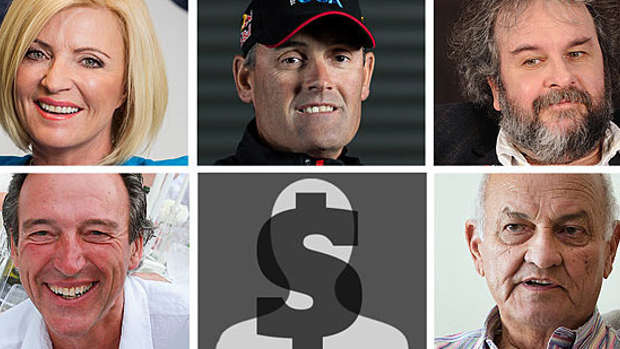 Graeme Hart has added a cool $2 billion to his estimated wealth this year, according to the National Business Review's 2015 Rich List.

The major contributors to the 2015 Rich List, released today, remained largely unchanged from last year, with the top ten names identical to 2014, with the exception of Michael Friedlander who moved from fifth equal to fifth.

Quite a bit below them are Prime Minister John Key ($55 million) and America's Cup yachtsman Sir Russell Coutts ($50 million).

The list also features 15 new faces and some that haven't been seen for some time. Malcolm Dick and Annette Presley were last on the list eight years ago. The pair sold their telco business CallPlus for $250 million to Australian company M2 in April.

This years newcomers had a combined worth of just over $1.2 billion, and NBR news editor Duncan Bridgeman said growth in the total value of the list - up to $55 billion for New Zealand based Rich Listers - was an indication they had been able to capitalise on their wealth in the last year.

"We have had some reductions in the value of some on the List but that is far outweighed by the increases and the newcomers we have identified," he said.

Sir John, 88, was also one of the country's top philanthropists as well as a leading patron of the arts, and chairman of his famously private family's charitable Todd Foundation.

Drawbacks of being on the list
The highly public spotlight that the list puts on the country's most wealthy people can be uncomfortable, says Hamish Edgar - whose family sits at number 111 with an estimated wealth of $115 million.

The Edgar family, led by his father Sir Eion Edgar are well known across New Zealand for their various endeavours in both business and charity, as well as Eion's work as a sharebroker and as founder and chairman of brokers Forsyth Barr.

Hamish said the family had struggled with being on the list, preferring to be defined by the work they had done and their achievements, rather than a number on a piece of paper.

"I think traditionally we've found it difficult," Edgar said. "It's not something we particularly like. We've always tended to be, or wanted to be fairly humble about things like that and certainly not flashy," he said. "You want to be your own person and people to take you for the face value of the person you are not the money you have."

Of his father, Edgar said him and his two brothers Jonty and Adam were extremely proud, and of his achievements in a business and community context, adding that it was "a great target to even achieve half of what he's done".

Edgar said the family had had concerns in the past around the accuracy of the list, although he said this had probably improved over the years.

"The number to me is irrelevant, it's the success and the positive things that have been done that are the important things," Edgar said. "Those things should be recognised and celebrated, so in that respect we appreciate [the list], but there are still certain aspects of it that we shy away from and often we've also found that there are mistakes, or that sometimes the research behind it is not that accurate, but presumably that has probably got better."

Although Edgar said he had become used to being on the list, historically references to it had been unwelcome, however he noted that most of the people he dealt with now tended to treat him for his face value and not for his family name.