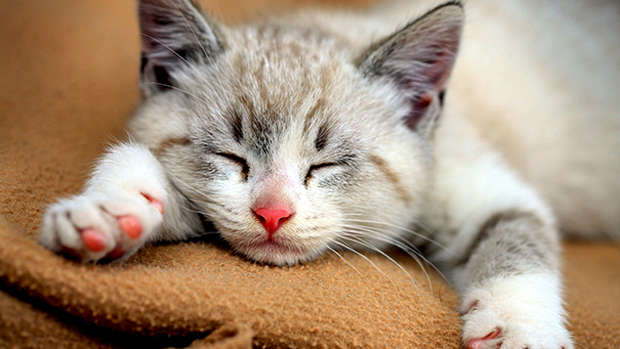 A new study has shown cats really don't need their owners to feel secure and safe.

Although owners might worry that their pet is nervously pining for their return when they leave the house, in fact, cats show no sign of separation anxiety.

Researchers at the University of Lincoln have concluded that cats, unlike dogs, do not need humans to feel protected, preferring to look after themselves.

But before cat lovers start despairing about their aloof house guests, animal behaviourists say they should actually take the finding as a compliment. If cats stick around, it means they really want to be there.

"The domestic cat has recently passed the dog as the most popular companion animal in Europe, with many seeing a cat as an ideal pet for owners who work long hours," said Daniel Mills, Professor of Veterinary Behavioural Medicine at the University of Lincoln's School of Life Sciences.

"Previous research has suggested that some cats show signs of separation anxiety when left alone by their owners, in the same way that dogs do, but the results of our study show that they are in fact much more independent than canine companions.

"It seems that what we interpret as separation anxiety might actually be signs of frustration."

To find out if cats needed their owner to feel secure, the researchers observed how 20 cats reacted when they were placed in an unfamiliar environment together with their owner, with a stranger or on their own.

The study monitored the amount of contact sought by the cat, the level of passive behaviour, and signs of distress caused by the absence of the owner.

"Although our cats were more vocal when the owner rather than the stranger left them with the other individual, we didn't see any additional evidence to suggest that the bond between a cat and its owner is one of secure attachment," added Professor Mills.

"This vocalisation might simply be a sign of frustration or learned response, since no other signs of attachment were reliably seen.

"In strange situations, attached individuals seek to stay close to their carer, show signs of distress when they are separated and demonstrate pleasure when their attachment figure returns, but these trends weren't apparent during our research.

"For pet dogs, their owners often represent a specific safe haven; however it is clear that domestic cats are much more autonomous when it comes to coping with unusual situations."

Although the researchers say cats can still develop bonds with, and affection for their owners, the new study shows that they do no need them in the same way that dogs do.

However, cat expert Celia Haddon, author of Cats Behaving Badly and How To Read Your Cat's Mind, said owners should not feel that their pets do not love them.

"This study shows that cats do not need their humans to feel safe, they don't depend on us, they look after themselves. If they are scared a cat won't come to its owner, it will jump on top of the wardrobe or hide under the bed," she said.

"But in a way that's a real compliment. Cats won't live in an unhappy home, they'll just walk out. And abandoned or feral cats get on just fine on their own.

Alice Potter, cat behaviour and well-being expert at the RSPCA, who was also one of the study authors said the study could help owners meet the needs of their pets.

"It suggests that if a cat is scared or has been involved in an incident it's not going to want a cuddle, it's going to want to go and hide, so owners need to provide a place for that to happen," she said,

"Likewise an owner shoudn't worry if their cat doesn't want to be comforted. It's just doing what comes naturally."

The research was published in the journal PLOS One.