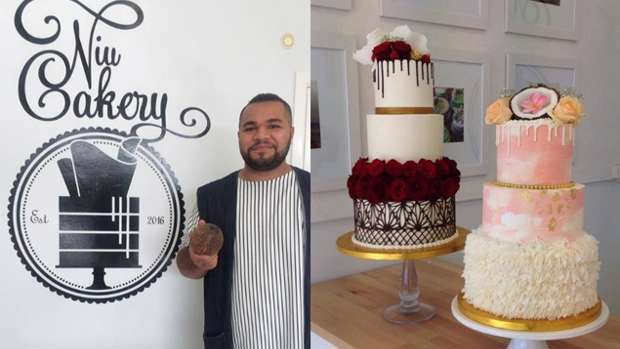 He's just 22 and has no formal training, but Niuafe Junior Malupo has people lining up for his intricate cakes months in advance.

Those who grew up with the Aucklander were his testers throughout his Lynfield College school years as he worked to perfect what would turn into the start of a career.

He now has his own business, Niu Cakery in New Lynn, and photos of his colourful creations posted on Instagram, where he has 14,000 followers, get thousands of "likes".

In May, he was already booked solid for June and July.

I love this cake so much! Thank you so much Gloria for giving me creative license to slaaaay. Theme colours are magenta and black for Brina's 30th today. I think it's time to start saving for a flash DSLR Cam so I can capture all the details!! Still using my shitty iPhone 5 😩😭😭 #struggleisreal Oh and the cake stand is from Farro Fresh and the amazing topper is from my friends Red Pepper.

Single-tier cakes start at $100 while three-tier creations can cost up to $465.

Mr Malupo has been baking as long as he can remember; often helping mum Olga as a boy. "I used to always watch her because she was always in the kitchen baking."

One day, he posted a photo of his latest creation on Facebook. He kept up the habit. "People started to message me ... asking if I could do some cakes."

After finishing high school and dropping out of a business management course he decided was not for him, he started working at Hallensteins in 2014. "My mind was just all over the place ... I've always known that cooking and baking was my passion. But I didn't think I could pursue that as a career.