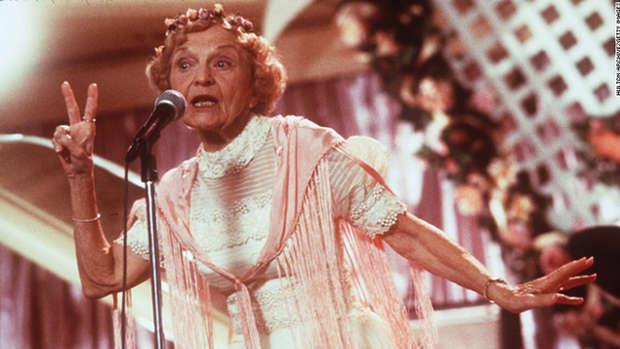 Her name was Ellen Albertini Dow. You probably knew her as the rapping granny from 1998's "The Wedding Singer."

She died Monday at 101, according to representative Juliet Green, of Juliet Green Management.

"I said a hip hop, Hippie to the hippie. The hip, hip a hop, and you don't stop, rock it," Dow jauntily sang in the movie's version of the hip-hop classic "Rapper's Delight" by the Sugarhill Gang.

But this woman was so much more than a gag in an Adam Sandler movie.

She appeared in more than two dozen films and nearly 40 television shows, among "The Golden Girls," "Seinfeld," "Newhart," "Scrubs" and "Six Feet Under." She appeared on Broadway three times.

Dow began studying dance at the age of 5, according to her Internet Movie Database biography.

She worked with the likes of dancer Martha Graham and French mimes Marcel Marceu and Jaques Lecoq, according to her resume on her own website. She ran a mime troupe for a while, and earned a master's degree in theater from Cornell University.

She taught drama at two Los Angeles area colleges for nearly three decades. The theater at the second of those schools, Pierce College, was named after her and her late husband, Eugene Dow -- who founded the department.