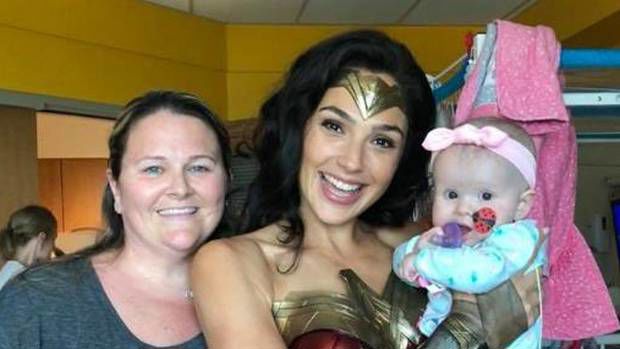 Movie star Gal Gadot surprised children at a Virginia hospital with a superpowered superhero moment: She visited them wearing her iconic Amazonian armour costume from the popular Wonder Woman film.

Gadot doled out hugs, kisses, and autographs Friday at Inova Children's Hospital in northern Virginia. She posed for photos with patients and staffers, and those started popping up on social media over the weekend.

One mom, Kelly Sahady of Sterling, posted photos of Gadot holding her 7-month-old daughter and giving her a kiss.

Some days are just WONDERFUL!!! So grateful for the stunningly gorgeous and kind Gal Gadot for bringing her superpowers to the kids at work!!! #wonderwoman #ilovemyjob

Crews have been shooting Wonder Woman 1984 in the Washington region in recent weeks.

Dear @GalGadot- Thank you SO MUCH for visiting my patients and colleagues at #InovaChildrensHospital! Next time, can you align your visit with my call schedule? Love, #SuperFan pic.twitter.com/kmE7CoFRvE