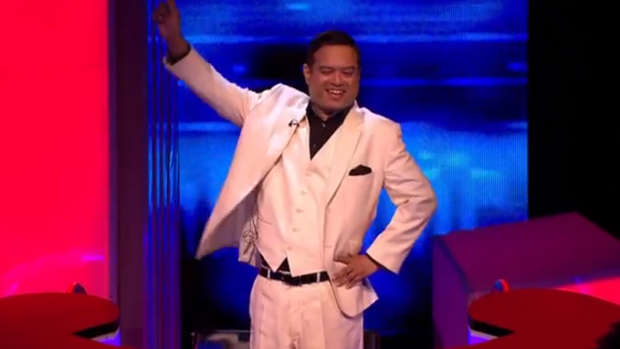 Paul "The Sinnerman" Sinha is a fan favourite on The Chase.

And on a recent episode of the quiz show, the much-loved Chaser delighted fans even more with his dance moves.

Facing off against British TV presenter Sarah Greene on a celebrity edition of the game show, the 49-year-old brainiac - who is famous for his white suit - received an odd request from his opponent.

While the Chasers traditionally take their seat at the table, Paul was asked to stand up.

Looking up at The Sinnerman, Sarah asked: "Can you do me a favour?"

As Bradley and Paul watched on with intrigue, Sarah continued: "Can you stand up for me, please?"

The Chaser obliged and Sarah went on to ask him to point his hand in the air then back down, reminiscent of John Travolta in Saturday Night Fever.

Paul happily performed the routine for Sarah, prompting her to say: "I've always wanted to see him do that!"

We have to admit, his white suit does have a very Tony Manero look about it!