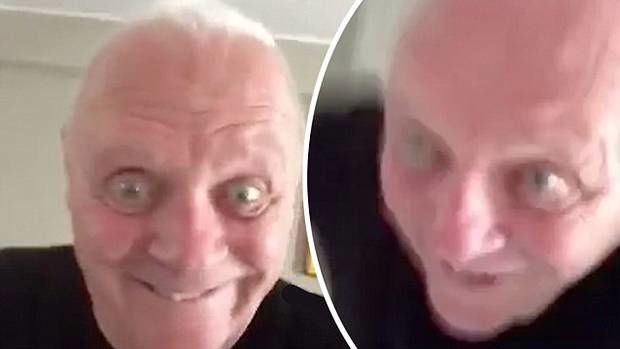 He's a legendary actor famed for his menacing lead role as Hannibal Lecter in Silence Of The Lambs.

And Sir Anthony Hopkins proved he could still send shivers down the spine as he posted a selfie video of a maniacal dance to Twitter on Monday according to DailyMail.

The 80-year-old iconic thespian pulled off some serious dance moves to an upbeat soundtrack on the viral video, which has since received a massive 5 million views and 56,000 retweets.

This is what happens when you’re all work and no play... pic.twitter.com/2KvkJ2baw6

Dressed in all-black, the Westworld actor crinkled his face up and widened his eyes in a wild manner as he sped up his outlandish moves.

Anthony flailed his arms around during his eccentric dance and bobbed the camera up and down in a dizzying pattern.

Perhaps feeling slightly overworked, the actor - who has consistently appeared on the big and small screen for over 50 years - gave a small glimpse into his mindset after captioning the video: 'This is what happens when you're all work and no play...'.

His caption could be referring to the old proverb of overworking leading to dreadful boredom, popularised by Jack Nicolson in hit 80s horror flick The Shining.

Fans were both puzzled and highly amused by Anthony's crazy antics, taking to the micro-blogging site to vent their confusion and delight.

'With all due respect, Sir Anthony, that is THE single most peculiar thing I've seen all day.' wrote one fan about the new viral sensation.'

Another added: 'That video of Anthony Hopkins dancing is scarier than the whole Hannibal franchise.', while a third commented: 'For about 30 seconds now, I was utterly convinced Jack Nicholson and Anthony Hopkins were the same person.'

'This is literally the scariest thing Anthony Hopkins has ever done.' said one petrified fan, as one more said: 'Why did I feel that Hannibal was chasing me while watching this video?'