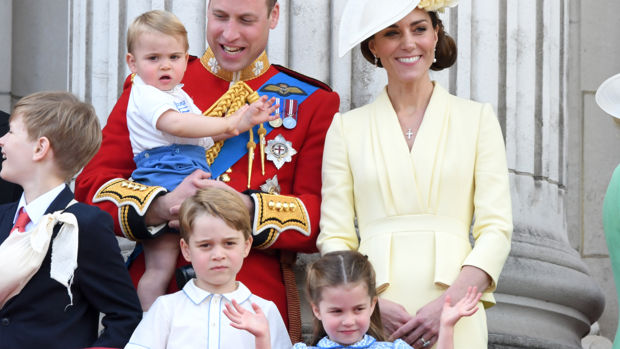 Prince George's sixth birthday is the gift that keeps on giving for royal fans!

In addition to the three new photos Kensington Palace shared of the future King, the Army in London has released a special never-before-seen family photo of the royal youngster with his siblings, Princess Charlotte and Prince Louis, and father, Prince William!

The adorable snap - which was taken less than two weeks ago at the King Power Royal Charity Polo Day - shows the birthday boy smiling, while Charlotte is distracted by her new friend - the Irish Guards' Wolfhound mascot Domhnall.

Proud father-of-three, the Duke of Cambridge can also be seen wearing a big smile in the rare family picture, as he holds one-year-old Louis in his arms.

Posting the photo on the Army in London's official Twitter account, they wrote: "The Army In London, including the Irish Guards' Wolfhound mascot Domhnall, is wishing HRH Prince George a very happy 6th birthday today. Our Soldiers are always on duty, ready to serve!"

READ MORE:
• The surprising new title Kate Middleton will be given when Prince Charles becomes King
• Three new handsome photos of Prince George have been released to mark his sixth birthday!

George is reportedly celebrating his birthday on the private island of Mustique with his parents and siblings.

The Caribbean island is a favourite of the Cambridges and where the young Prince rang in his fifth birthday last year.